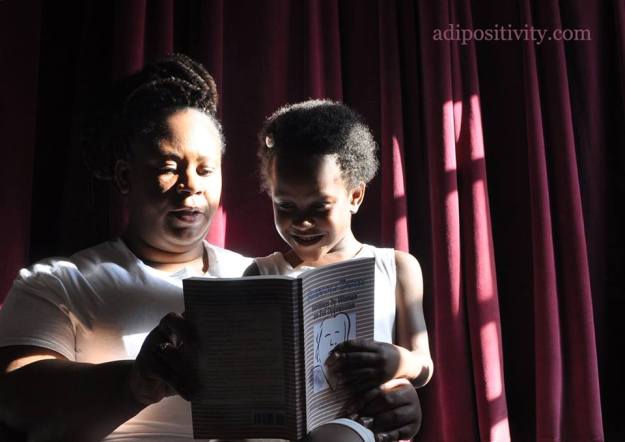 A new generation is introduced to Shadow on a Tightrope. Photo Credit: Substantia Jones

I have to confess.  I recently re-read Shadow on a Tightrope in honor of this blog carnival.  I tore through the book at warp speed, reveling in the sheer, unadulterated, radical awesomeness of it.  I was moved by the rawness and honesty found in so much of the writing.  And I felt a deep sense of gratitude for the women who came before me in this amazing movement of size acceptance.

I felt all of these things, but more than any of these things, I felt a sense of awe.  These women blazed a trail across this far-flung land.  They build a bridge to one another through their written words.  And they did it with pencils and typewriters.

Now I understand that there’s a real danger here that I will tell the activism equivalent of walking to school and back, in the snow, and that it was uphill both ways.  But isn’t that sort of what we are talking about here?

In reading these stories, I was struck by how hard it was for size activists simply to find one another.  I was fascinated by the level of manual work they did, collecting checks to cover the costs of photocopying medical journal articles and studies, copying them and mailing them out to one another.

I was also struck by how often a writer in the anthology refers to years or even decades in isolation–believing they were the only one to feel the way they did.  And I was moved by the joy expressed in finding even one like-minded soul with whom to have dinner, swap letters or share late-night phone calls.

It’s hard to speak of size acceptance today, even with the myriad of online research resources and the powerful forums and channels that bring like minded activists to the distance of just one click from one another.  While it’s true that modern life brings a different set of headaches (like moderating yet another absolutely vile YouTube comment) it also brings us comfort and tremendous support.  Often, within seconds of writing a blog post or sharing a thought on Facebook, I’ll have a word or two of support or encouragement.  I can debate difficult questions about the nature of size acceptance in real time, with scholars throughout the world.  But even so, it can be hard to stand aside from the mainstream on notions of weight, weight loss, fat acceptance, and Health At Every Size.

But how much more difficult was it back in 1983 or even earlier? Shadow on a Tightrope, was created in a time when writers put their stake in the sand, said their piece and then waited weeks or months or even years to see what the world had to say about it.  Yet it’s astonishing, how many stakes were planted, and just how much ground was covered by this early work.

We owe a debt of gratitude to these early pioneers.   That’s why I am so excited to see projects like this one, celebrating the 30-year anniversary of a seminal work in the Size Acceptance cannon, or the history project initiated by Barbara Altman Bruno on behalf of ASDAH, and the tremendous work being done by Ragen Chastain to document the stories of the founders of this movement in their own wordsl

I am proud and honored to share in some small way, my heartfelt thanks to those who not only added to the scholarship side of the size acceptance movement, but also paved the way for me to step off the diet/body hatred merry-go-round and learn to love my body far, far earlier than I would have done without their guidance.  For helping me reclaim weeks, months, years and even decades for body love, self acceptance and even joy, I’m very, very grateful.

Perhaps 30 years from now, the young upstarts will be rolling their eyes and wondering how we old farts ever built a movement without transporter beams and holographic recording.  If at that point we are able to leave behind even a small fraction of work on par with that found in Shadow on a Tightrope, I will count us successful indeed!

P.S. Want to get access to FREE STUFF?  Just opt in RIGHT HERE!