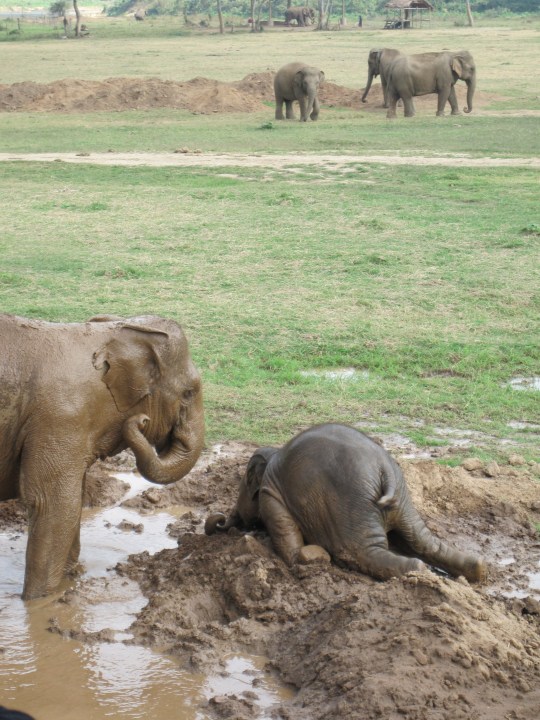 Baby elephant metaphor day 2.  Yup, last night and this morning’s travel kicked my butt.  Not gonna lie to you.  Started out in Harrisburg, PA at around 6PM EST last night and finally got to my home in my bed at 4:00 AM PST (That’s 7AM EST) this morning.  Wanted to get up early but was feeling like that little elephant guy in the picture up there, with my head under the pillows, saying, “I don’t wanna get up and you can’t make me!”  That, my dear friends is why you are getting The Fat Chick Sings After Dark Edition.

I was really pleased and proud of the way I got through things last night though.  I got through the first leg of my trip okay and landed at Washington Dulles right on time.  Our flight for LA boarded on time and we just got settled into our seats when we heard an announcement.

The pilot told us there was an issue on the plane but they thought they could get a deferment.  He said that the deferment would probably take about 30 to 60 minutes.  I was bummed but determined to just stay calm and make the best of it.  Ten minutes later the pilot made another announcement.  He said that he was told the deferment, if we could get it at all, would take much longer.  So they found another plane we could take to LAX.  Unfortunately it was a long way away in another terminal.  A lot of people groaned and complained, but again, I resolved to make the best of it.

We hiked the 15 minutes to the other plane, and as we went a lot of people were still angry and complaining.  But I KNOW it could have been so much worse.  A lot of people in the last 3 or 4 days have faced delays of 10, 12 or even 24 hours.  In the past, people have been trapped in their plane on the runway for 2, 3 or even over 4 hours while repairs or mechanical adjustments were made.  So  I decided to see this as a minor setback and a chance to stretch my legs.  After about a 40 minute wait, we all boarded the new plane (in exactly the same seat configuration) and soon got underway.  All in all, we arrived about 50 minutes late into LAX.  It was pushing 2AM by time I got my bags.  But I got back to my husband safe and sound, and all was good with the world.

So many times I have faced situations like this with anger and frustration.  So many times in the past I have cursed and muttered and fretted. But this time I made a special effort to be calm and to make the best of it.  And you know what? It really did make things better.  There were plenty of people around me who were plenty angry.  But they didn’t arrive in LA even one minute sooner than I did.  In fact, the trip probably seemed a lot longer to those folks who were really mad.

So I took that as my karmic lesson for yesterday.  I decided to take a deeeeeeep breath and just roll with it.  This is one of my real-life resolutions for this year, and I think it’s a good one.  So what do you think? How do you cope with life’s copious pain-in-the-butt moments? I’d love to hear your thoughts and/or stories.

By the way, The Fat Chick’s internal clock is infernally messed up right now.  Expect schedule changes from my usual posting times for blogs, videos, The Right Now Show and hours of consciousness. There are will be no meal vouchers or refunds available.  Thank you for your patience.  That is all.

P.S. Speaking of travel, the Fit Fatties are aiming for Vegas baby!  Help us gather those few hundred miles needed to get us to Sin City by Friday.  Click here to learn more!