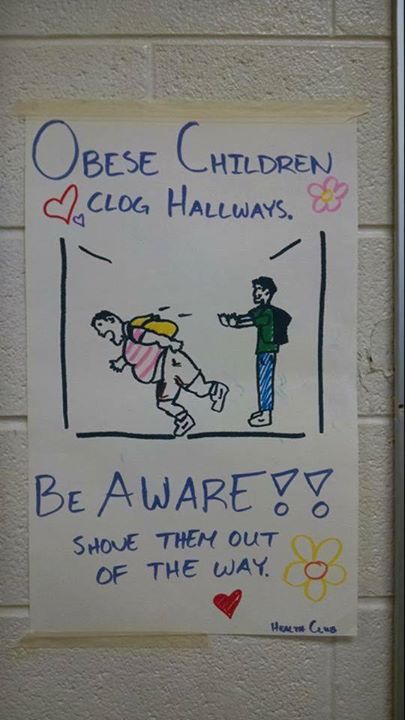 This ugly, UGLY picture was taken today of a poster that was taped to a wall at Northern High School in Calvert County, MD.  There’s a lot of argument about the poster–which we will get to in a minute.  But in the meantime, let me tell you just what interesting timing this poster has for me personally.

As I sat in the audience last night at a Producers Guild Pre-release screening of “A Brave Heart–The Lizzie Velasquez story” I heard the people around me gasp.  We had reached the part of Lizzie’s story where she recalled at age 17 finding an unauthorized video of herself posted on YouTube.  The video was captioned “The Ugliest Woman in the World” and had been seen over  4 million times.  And the comments–oh the comments.  People said things like , “Why didn’t her parents abort her?” and “Kill it with fire!!!” I heard people whisper things like, “oh my God!” and “I can’t believe it.”

I could believe it.  I haven’t lived Lizzie’s Velasquez’ story.  Nobody but Lizzie has lived that amazing life.  But I’ve lived with the hate.  I’ve read comments like that on my own blog and twitter feed and especially my YouTube account.  I’ve swapped stories with other fat activists about the death threats and the rape threats and the doxxing and all other forms of online harassment that so many of us experience on a daily basis.  And I thought how privileged some of the people in that audience were–that they didn’t really know that sort of online hate existed.  That they found it difficult to believe.

I was so proud of my husband, who stood up during the Q&A to relate that he had been completely ignorant of how bad the online climate was, of how unbelievably ugly it could be, until he started reading some of the comments that people have directed at his own wife.  He reiterated how important this movie was–how relevant it was–because adults need to understand just how bad it is out there.

The movie, directed by Sara Bordo also talked about how dire the consequences of bullying can be.  Lizzie arose triumphantly out of her bullying experience.  But Tina Meier’s daughter didn’t arise from the bullying at all.  After some particularly bad cyberbullying by her peers, Meier’s daughter committed suicide.  Tina and Lizzie have teamed up–working to get new federal antibullying legislation passed in the US.

Again, as the audience came to this point in the story, many gasped or covered their mouths in shock.  I simply nodded my head and cried.  Because I already knew Megan’s story.  I knew what had happened to her.  And I knew, just a little of what she felt.  Because as I told Lizzie and Sara after the screening and the Q&A, I could have been one of those kids.  I might have not made it out.  I was bullied relentlessly as a teenager.   I came home sobbing, vomiting and covered with hives from the stress of it.  At times I felt I could no longer take it.  But I got relief.  I didn’t have email or a Facebook account.  At the end of the day, I could escape at home to my loving family.  I had two whole days per week free of it.  Today’s kids do not.  Because of social media, these kids have to deal with this 24 hours per day and seven days a week.  Given that situation, I honestly don’t know if I would have made it. 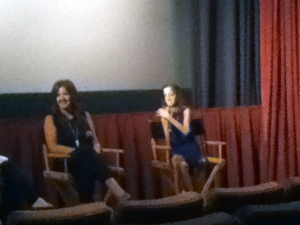 Lizzie and Sara at the PGA screening.

But this is not a fun or easy or comfortable subject.  Many people who don’t have to deal with this sort of bullying would rather imagine that “it’s not really that bad” or “it’s not that big of a deal.”  Which leads me to the picture posted above.  A student took a photo of that poster.  The picture was posted online and has gone viral.  The original poster stated that the photographer believed that the poster had been taped up with the at least tacit permission of at least one teacher.  And the feathers are flying.  Many people are demanding answers.  Did a teacher know about this poster?  Did a teacher give permission or at least know it was being posted?  Who is the kid responsible for this thing?  And are they being disciplined?

Naturally the social media frenzy puts the school in a bad light.  But in a classic case of spin cycle, the Superintendent stated:

We are aware that a photo is being circulated on social media of a poster from NHS that makes a mean and inappropriate reference to obese students. That poster was not approved by any teacher or staff member and was up no longer than five minutes. The matter is being appropriately handled by the administration.

This is a good example to all of how a 5 minute bad idea can live forever on social media and be distributed with inaccurate references to good people. Rather than having a lifespan of 5 minutes, this poster (with the help of many well-meaning people) was effectively copied and posted in every hallway, classroom, and home. You can help put an end to the unfair reference to NHS staff and the continued distribution of this inappropriate message by deleting or, at the very least, refusing to pass it along. Thank you.

There is a certain amount of sense in choosing not to spread hate with wild abandon.  That’s why I didn’t link to Ms. Arbour’s nonsense and don’t give clicks to a lot of other ugly things out there.  But there are some problems with this response.  First of all 5 seconds in the eyes of a particularly vulnerable person are enough to do irrevocable harm.  5 minutes, in a high school hallway, is an eternity.  And while I respect the school’s right to deal with this problem according to its own policies, I have to vehemently disagree with the idea that simply not sharing this photo will make the problem go away.  (It won’t.) And I think that people need to be confronted with the level of nasty that truly exists before they are tempted to say they don’t have time to be “P.C.” that fat people are just whining and that fat shaming is an imaginary concept.  It is so very, very, very real.

That’s why I applaud Sara Bordo and Lizzie Velasquez for having the courage to show the bullying it all its true ugliness.  Refusing to censor Lizzie’s hate messages along with refusing to drop Megan’s suicide story resulted in the movie receiving a controversial PG13 rating.  This means that most schools won’t be able to screen the film because of the rating.  I find it fascinating that any kid old enough to move a mouse can be exposed to this online without warning and without context or support.  But a movie that explains how bad it is and gives kids and adults tools to discuss it is rated PG 13.

With Lizzie at the screening.

I really want to recommend that you and yours find a way to see this amazing film.  It is a stark look at the brutality of bullying.  It is also a warm, ultimately uplifting story about how bullying can be (sometimes) overcome.  It’s a great starting point for the deep conversations we need to be having about this topic–however more comfortable it might seem to simply walk (or run) away from it.

P.S. I’d like to remind you that the Fat Activism conference is just a few short weeks away.  Ragen and the organizing committee and I have put together an absolutely amazing lineup of speakers who can help you figure out just exactly what can be done.