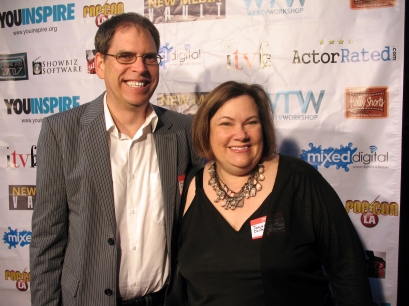 The Fat Chick and her fabulous husband on the red carpet at the New Media Vault Event at the W Hotel at Hollywood and Vine.

Last week my hubby and I went camping. We got really dirty and had to boil hot water for dishes. Then we came home, took baths and went to glitzy red carpet event at the W Hotel in Hollywood. Such is the life in LA LA Land. Last week we addressed the joys of camping and getting back to nature. This week we’re going to address the other half of our crazy week and talk about stepping out.

I think many of us have learned to hide our big fat lights under a bushel barrel. Many of us were taunted and teased as children.  As adults, some of us are still taunted and teased.  And just recently the situation of NY School Bus Monitor Karen Huff Klein demonstrated that it can be tough out there for people of size. (At least the school imposed a harsh penalty on those boys for their awful behavior.) When you have spent your life being singled out and taunted and teased and harassed and called awful names it’s human nature to want to make yourself less noticeable. It’s easy to see why we would try to make ourselves small and fade into the background.

While this sort of blending in is perfectly understandable, it’s also a little bit sad. We are big, bright, beautiful shining stars and we are meant to SHINE baby!  It’s hard and it’s scary, but it just needs to happen.  So this week we’re going to be talking about moving out of the shadows and into the light–starting with my appearance at the event pictured above.

I’ve been working in the film and media industry in Hollywood for over a decade now and have been in the public eye for even longer than that, but let me tell you a little secret. I still get nervous every time I go to a public event. I still wonder if people will judge me. I keep waiting to be “found out” and hear some body shout, “Hey, who let that short, chubby chick from Wisconsin in here?” You know it’s never happened, but I’m always aware that it might.

When I get nervous, I play a little game. As I’ve said before, I don’t really know what most people are thinking about me.  So I begin the evening by imagining they think I’m awesome.  It’s all in my head anyways so I might as well imagine good things, right?  So I grab my husband’s arm and a bracing (and ridiculously overpriced) glass of pinot grigio and jump right in.  And most of the time, I have a lot of fun.  But in order to have that fun and to shine in the light, I first have to overcome that moment of existential angst in my bathroom at home, gather my courage, put on my big girl Hollywood “playah” panties and get out there.

So my little chicklettes, this week we’re going to talk about donning some sequins and rhinestones and hopping out of the nest of your little comfort zone.  Because to deprive the world of your basic awesomeness for even one more day would be a terrible, terrible crime.