So I came across yet another study last week about exercise and the brain.  I’m frankly more than a little annoyed about the premise of this one, but I think it still has much to teach us about the way we perceive and experience exercise.

The study indicates, that when people think about exercise as “exercise”–an activity that they “should” do, they are more likely to consume a dessert after lunch, than if they think about exercise as a fun and and enjoyable activity.  Here’s how the study worked.  The women were split into two groups.  One group was told they were going out to exercise and were given a card with a 1 mile walking route they were to follow.  This group had six stopping points marked  on the walk where they were to rate their energy level.  The other group was given the same route but were told the purpose of their walk was “fun”, and they were to listen to an MP3 player and evaluate the sound quality at six different points along the walk.  Both groups were told that a lunch would be served after the walk.

After the walk (and before the lunch) the participants were given questionnaires rating their experience as fun and as a form of exercise.  Then the participants went off to eat.  The scientists weighed how much food each participant ate and whether they chose the “hedonistic” option of drink (cola vs. water) or dessert (chocolate pudding vs. applesauce).

Here’s what I found really interesting about the study.  The researchers were determined to find a difference in eating patterns among these exercisers.  They did, but it was really, really small.  If I understand the table correctly the differences among the fun exercisers and the utility exercisers was mostly a difference in how much chocolate pudding they ate.  And from what I see we’re talking about a very small difference in calories.  This finding got the scientists all excited, as they postulated that those who perceived their exercise as exercise (work) felt that they needed to “reward” themselves with food.  Now best I can tell we’re talking about less than 50 calories more of chocolate pudding, which is like an extra spoonful or two.  This is hardly what I would call hedonistic binging, but I digress. 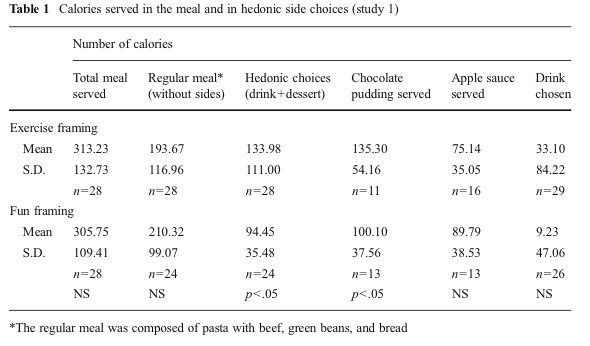 More interesting to me were the results of the surveys that the participants filled out.  These results were sort of buried within the paper, but seemed the most significant to me.  The surveys indicated that those participants who perceived the exercise as work were more tired than those who perceived it as fun.  And the “fun” group ended the activity in a better mood than the “work” group.  Now, I feel, we’re getting somewhere.  Saying that the “work” group enjoyed two extra spoonfuls of chocolate pudding than the “fun” group and were thus rewarding their 1 mile trek with gluttonous behavior undoubtedly makes better headlines than saying that exercisers who have fun are less tired and in a better mood than those who don’t.  But I’m not sure I’m really all that worked up about 20 calories worth of chocolate pudding.  I am very interested in how people feel after they exercise because I’m pretty sure, based on my years of experience, that if they feel energized and uplifted after their Tuesday workout, they are a lot more likely to return for the Thursday class.

So what do we take from this?  Those who think of themselves as “fit” are likely to have better outcomes than those who don’t.  But thinking of your work as exercise might make you more tired and in a more lousy mood than those who think of their activity as fun?  In the end, my hypothesis is that you should tell people they are exercising and that it has value, while at the same time making it as much fun as humanly possible.  That’s where I aim my classes.  And I think, that’s why students come back year after year.

But however you slice it, I think it’s important to remember that one of your most important fitness tools is the one you carry between your ears.

Want to learn more about the fun types of exercise I have to offer?  Join my mailing list!