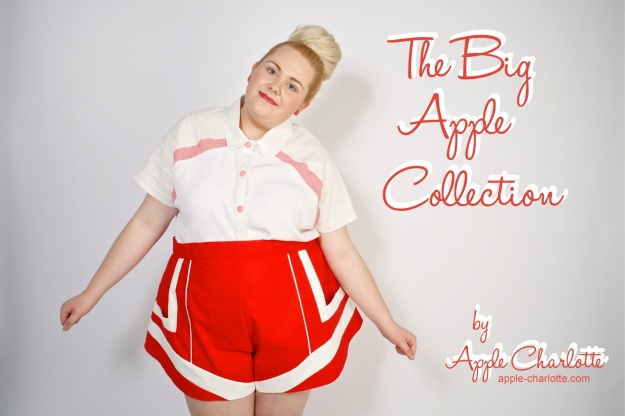 So I ran across THIS story this past week about Charlotte a fashion student in London who dared, DARED to make a plus-sized collection for her graduate project.  Unfortunately (but not surprisingly) she received a lot of resistance from her school about her decision to create a plus-sized fashion line and use plus-sized models.  At least initially she was told that she couldn’t show her collection in the University’s London showcase.  She was told that she would have to source all her own models for her own showcase and create all of her own pattern blocks.  All this because she dared to suggest that perhaps some designs should be created for the 50 percent of the female population that can’t wear “straight sizes”.  (Hmm, isn’t “straight sizes” an interesting term in itself?)

All of this in the same week that we’ve seen the brouhaha over Abercrombie & Fitch’s CEO, Mike Jeffries and his hateful comment that his clothes are for the “cool kids”, and that he really doesn’t offer plus sizes because he really doesn’t want fat people wearing his clothes.  Why does Mike do that?  Simple.  He says that because he believes it will further endear him to his target market of young, thin, privileged, white kids.  And he says that because he really didn’t believe there would be any problem with it.  Oh after all the yelling Mr. Jeffries apparently made a half-hearted apology just to keep his name in the papers.  To which I say, F-you Mike Jeffries.  Oh and please enjoy this special video response to Mr. Jeffries recorded on the streets of my beloved Hollywood…

However you slice it, Mike Jeffries got a publicity bonanza for his brand as a result of this whole thing.  And while the surprising backlash probably prompted this apology, the reality is, all publicity is good publicity if they spell your URL correctly and drive traffic to your facebook feed.

But there is an aspect to this whole thing that puzzles me.  The scorn of the fashion industry to anyone who wears over a size zero is hardly new.  But we’re still climbing out of a worldwide recession.  You’d think fashion companies might be a tad more interested in making money.  You’d think that they’d want to give a little more attention to the basic principles of supply and demand.  And no matter how you slice it, the place where the market is under-served, the place where there is more market share to be got and less competition to fight is in plus-sized fashions.  Seriously.

Don’t believe me?  Do this experiment.  Go to any mall in America.  Count the number of clothing stores for women.  Now count the number of clothing stores for women that carry plus-sized fashions.  Let’s take the Fashion Square Mall in Los Angeles as an example.  There are 40 stores that carry women’s clothing.  The only two that offer any plus-sized clothing in the store are the two major department stores, Macy’s and Bloomingdales.  In both cases, the plus-sized clothing departments are a small fraction of the overall floor space.  Two stores at the mall offer plus-sizes via their web sites (J Jill and Forever 21) but not in the stores at this mall.  So of the 40 women’s clothing stores in this mall you can try on clothes over a size 14 at two of them.  This despite the fact that about half the female population of our country wears a size 14 or over.   Now I don’t have an ivy league MBA degree, but even I can figure out that the business opportunity lies with the plus-sized crowd.  So why oh why is the university discouraging the amazing Charlotte from creating clothes for the half of the population that is actively crying out for new clothes?  In this world of ballooning student loans and massive unemployment, why would they discourage a student from focusing on a market which A) the student has a great passion to serve, and B)The student might actually make some money?

The only answer I can come up with is stigma, pure and simple.  Charlotte has expressed pride at graduating and some consternation that she won’t know her final grade for some time.  But I for one, would be pretty indifferent to the judgement of any institution that taught me to be fashionably poor.