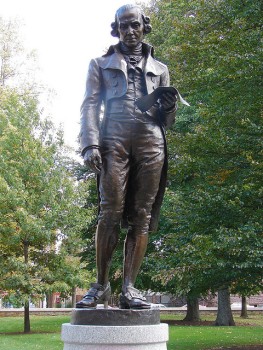 In honor of my upcoming appearance at Dickinson College, I thought I’d find something on campus that weighs more than me.  And it didn’t take me long to settle on Big Ben.  I’m not talking about the big clock in London here.  Nope, by Big Ben, I mean the large bronze statue of Benjamin Rush that was unveiled at the college on June 11, 2004.  The sculpture is actually a replica of one accepted precisely 100 years earlier by President Theodore Roosevelt as a gift from the medical profession to the nation.

Benjamin Rush is an important person to both American history and the history of Dickinson college.  He was a signer of the Declaration of Independence and was an important figure in psychology and medicine.  He fought against slavery, and for universal education (for both boys and girls) and for universal health.  He also fought for women’s rights and better treatment of patients with mental illness.  Benjamin Rush was one of the first to envision Dickinson College and served as an important trustee from the founding of the College until his death.

Let’s look at the statue stats: 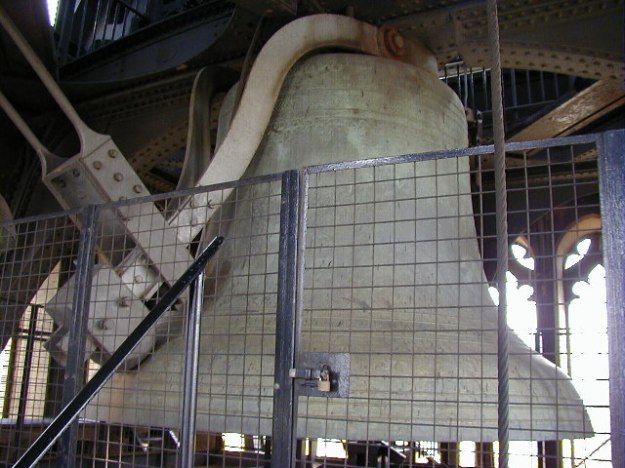 “Big Ben” actually refers to this bell within the Clock Tower in London.

Thought it was time for some Olympics-sized stuff that weighs more than me.  And since the Olympics are in London right now, the first thing I thought of was Big Ben.

Naturally when most people point to Big Ben in London, they are actually pointing to the clock tower.  Big Ben is the nickname given to the huge bell located in the belfry of the clock tower.  The bell was cast in 1858 and first chimed the hour  on July 11, 1859.

The huge bell is not rung by a clapper, but rather by a hammer located outside of the bell.  In concert with the Great Westminster Clock, the bell is accurate to within one second.  The clock is actually powered by gravity.  There are weights on huge cables that are wound by the clock engineers three times per week.  The engineers check the clock against the world clock from time to time and add or remove pennies to the pendulum to bring it back to perfect time.

Height of the Clock Tower: 97 Meters

Weight of the “hammer” that rings the bell: Over 400 lbs.

Conclusion: Big Ben weighs more than me.  (It just might be louder than me too, but the jury’s still out on that one…)