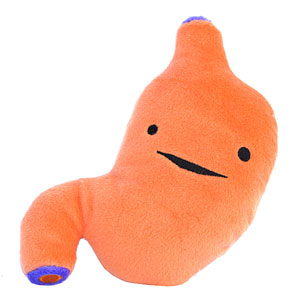 Okay, what I’m going to talk about today amounts to potential corporate backed, government sanctioned bulimia.  And it has a pretty major “ick” factor as well.  So if either of these things are triggering to you, you might wish to go back to Thursday’s post with the dancing bird.  I’m totally cool with that.

But there has been a flurry of articles and emails flying around about a firm that wants to tackle obesity by offering what amounts to an at-home stomach pump.  I know.  It sounds like an article from The Onion.  It sounds like a really badly thought out skit on Saturday Night Live.  I even checked Snopes.com  But unfortunately, it appears that this is real.

Wired magazine recently published the article, “US firm wants to tackle obesity with at-home stomach pump.”  In the story, they explain that a US company (ASPIRE BARIATRICS LLC) has filed for a US patent for “Apiration Therapy” which is intended to be “a non-invasive alternative to gastric bypass.”  Basically what happens is the patient has outpatient endoscopic surgery in which a tube is installed in their stomach that pokes out a very small incision in the center of the abdomen.  Once the incision heals, the tube is trimmed flush with the patient’s body and a “skin port” is installed.

The patient is then encouraged to regularly pump the contents directly out of their stomach.  Let me explain exactly what this means.  (And I’m offering an additional trigger warning right here.  Thursday’s dancing bird was super cute…)  Here’s a quote from the “study”

She “aspirated” after every meal: “the patient uncapped [her] tube, connected a 60 cc syringe and extracted food from her stomach twice. This resulted in a siphon effect, which permitted the subject to freely drain the stomach by allowing the open tube to empty into a bucket. The patient squeezed the tube to enhance propulsion and to break up large food.”

Okay.  So you eat a meal.  And then you connect a syringe to your “skin port” and create a “siphon effect” which “freely drains” your undigested stomach contents into a bucket. Apparently by doing this and drinking water between each aspiration, the dieter was able to evacuate between 2 and 3 liters of fluid after each meal.

Let’s just stop right there, shall we?  Just HOW can anybody think that this is okay?  How, exactly are you supposed to have anything approaching a normal life with this treatment?  After each meal, you have to attach a syringe and engage in a multi-stage process, during which you drink several liters of water and dump your raw stomach contents into a bucket.  How can THIS be a good idea?

The reason I am telling you this decidedly disturbing story is not simply to gross you out or titillate you with gory details.  (Although I have no doubt that both of these play a part in why the story was originally published).  No, I want to use this story to illustrate a few very important points.

1.  Our society makes people desperate to lose weight.  Fat people face constant messages that they are sick, lazy, gross, unworthy and useless.  Many are harassed by strangers in pubic places, derided by doctors, passed over by potential employers and face daily abuse by strangers and loved ones alike.  Fat people who have internalized these messages or are worn down by the constant abuse may become desperate.  They are desperate enough to have irreversible surgery done to alter the functioning of healthy organs.  They may even be desperate enough to siphon their stomach contents into a bucket.  But is the real problem here the fat, or the desperation that our world inflicts on fat people?

2. This patent application was filed based on a single study of 24 patients who, best I can tell, have been followed for less than two years.  Now it’s important to note that this invention has NOT been approved by the US Food and Drug Administration.  But given some of the folks involved in this project (including Segway creator Dean Kamen who co-invented the prototype) it is likely to move rapidly in that direction.  Can we just note the situation here where we had a guy who invented a product that keeps people from having to walk anywhere also inventing a bariatric product?  Anybody else see a contradiction here?  And while many weight loss schemes and products seem to work well in the first year or two, they all seem to have considerably less success at the 3-5 year stage.  What reason do we have to believe that this process would be any different?

3.  The purpose for the product as stated in the patent application is “The present invention is less invasive than current surgical procedures for reducing weight and allows patients to live a normal and active lifestyle without experiencing adverse side effects.”  Just exactly how normal is it to spend more than 20 minutes several times per day emptying food out of your gut into a bucket?  It is interesting however that the patent application does not cite any potential health benefits of the product outside of the “normal and active lifestyle”.  This may be because with their extremely limited sample size and study duration they weren’t able to record any.  Or maybe they just feel the health benefits of weight loss are something that “everybody knows” about.  Or maybe it’s because we’re finally realizing that the health problems associated with overweight and obesity may have been blown out of proportion.

4.  How is this not medically induced bulimia?  Whether you regurgitate your stomach contents or squeeze them out of a tube, it basically amounts to the same thing.  Sure, you may have less damage to tooth enamel and esophagus from the tube method, but it seems likely that many of the problems of malnutrition as well as the damage of the binge/purge cycle would apply here.  Maybe dealing with fat by creating a systemic, medicalized eatiing disorder is not the way to go here.

5.  It’s about money.  The prototypes were created, the medical trials were completed all at what had to be enormous expense, because there is a tremendously huge amount of money at stake here.  Gastric bypass surgeries seem to be waning in this down economy as stories of corruption, and more and more information about long term side effects and reductions in efficacy come to light.  Bariatric medicine is looking for the next “big” thing that will allow them to make a lot of money.  You can bet this project will be fast-tracked.

Okay, this post has already reached epic length and I should probably wrap this up here.  So here’s the bottom line.  Do we want to live in a world that is so emotionally toxic to fat people that they will do anything to lose weight?  Do we want to live in a world where the health benefits of intuitive eating and regular moderate exercise are pushed aside in a mad dash to create stunning “before” and “after” pictures and to line the pockets of bariatric medical establishments?  Or do we want to choose something better for ourselves and for all of our brothers and sisters of all sizes?

I don’t know when or if this product will ever come before the FDA.  I do know that in the mean time, I will continue to work towards a HAES (R) approach to wellness.  I know that I will work for health and well being for people of all sizes that is based on sound science, dignity and self-respect.