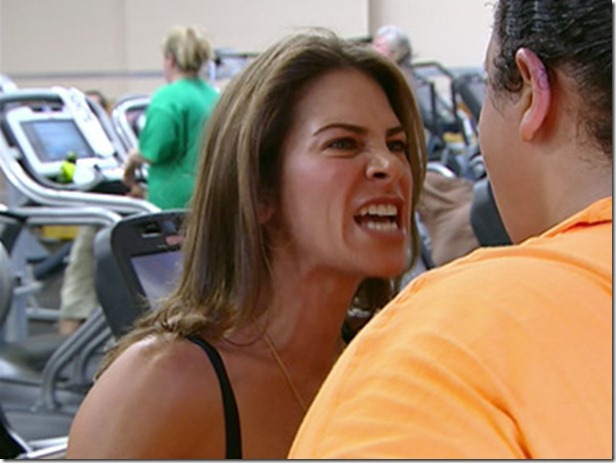 In an epic moment of facepalm, my facebook feed threw up this little fact:  Jillian Michaels has published her “Top 3 Guidelines for Improving Body Image” at EverydayHealth.com.  (No, I’m not gonna link to that ish.  Nope.)  This seems in line with her recent move to distance herself from Biggest Loser after she made untold millions from screaming at fatties on the show.

Now the irony of Jillian Michaels would be really funny if it weren’t so very sad.  This woman styled her entire career on being the queen of mean.  She came into our living room every week screaming at the fatties–about how ugly we were and how we were killing ourselves.  And some might suggest that Jillian Michaels might be making a genuine change or shift in attitude.  And I might even consider believing her if she started pulling products like her “6-week Six Pack” or her “Banish Fat, Boost Metabolism” or her “No More Problem Zones” off the shelves.  Nope, no, nopety nope.  You don’t get to give advice like “Be realistic about your body type.” when you are actively marketing a product called “1 Week Shred”.  And you don’t get to advise people to “Stop negative self talk.” while marketing a product called “No More Problem Zones.”

And if that didn’t tickle my sarcasm zones quite enough, this little gem is posted on EveryDayHealth.com with the tagline, “Always choose well.”  Seriously?  You put the queen of scream in charge of body image on your site?  For REALZ?  Is that choosing well?  Look, I’m sorry guys.  Just because Jillian is wearing a nice soft stripy sweater, and you’ve got her on a white set with a soft filter, it doesn’t make her nice.  And it certainly doesn’t make her qualified to talk to women about body image.

But can we talk here?  This is really a bigger issue than the Biggest of the Biggest Loser Meanies trying to change her image.  The real issue is the co-opting of important messaging in the body acceptance movement by people who just see it as the latest way to add market share to their products.  And I think as we go forward, and we start to gain traction, this is likely to become a bigger and bigger issue.

Let me take a moment and disclose some facts about me.  First, I acknowledge that even as “The Fat Chick”, I have an awful lot of privilege.  I’m white, middle class, and heterosexual.  That makes a lot of things in this society a lot easier for me.  Also, in terms of my size, I’m what you might call a mid-size fatty.  I’m certainly “plus-sized”.  But my size and my shape make certain things a lot easier for me than for many other fat people.  I face discrimination, but nowhere near as much or as intensely as many of my brothers and sisters in the movement.  I don’t receive these privileges as a result of anything virtuous I’ve done.  I was born with them.  And thus, while I can sympathize with people of all sizes, I can’t say that my experience is the same as all other fat people.  It just isn’t true.

I also have to admit that, having been in this space for many years, some messages are easier to sell.  Some messages are more palatable for the general public and as such, are more fun to say.  I get a lot more rewards for telling people to love themselves than I get for saying that society is brutalizing entire segments of the population, and that it is not okay and it has to stop.  A lot of people look at my midsized status and nudge me and say, “Well you’re okay, you’re not THAT fat.”  To which I usually respond, “ALL bodies are good bodies.  And people thinner than me are okay and people fatter than me are okay.  You don’t get to decide what sized body is acceptable for the general population.”  I say usually.  Because sometimes I just don’t have the spoons to deal with it and I just walk away.  I am not a persona.  I am not perfect.  I’m just a person.

But I think it’s important going forward to acknowledge that it’s not really okay to co-opt body diversity, size acceptance and body love language just to soften a campaign of ongoing body hatred.  It’s not really okay to call yourself an activist against weight bias or weight stigma if you still adhere to the “fat but not that fat” ideal.  It’s pretty easy to accept that nobody looks like a supermodel.  “Not a supermodel” is a pretty safe position to take.  Only a few of us in the world look like that, and even those few are Photoshopped beyond recognition.  But true work against weight bias and weight stigma includes recognizing that weight stigma and weight bias are institutionalized, rampant and ubiquitous.  It includes recognizing that even if most of us hate our bodies, that stigma and bias are likely to be different at size 12, size 22, and size 32.  And that weight stigma is not allowed once you are beyond a certain size.  Body acceptance is not just loving your body, unless you are, you know, really fat.  Body acceptance is for EVERY BODY.  And this work demands that you accept that you can’t simply solve the problems of weight stigma and weight bias with a poster and a little boost to your self confidence.  Working on your own feelings and confidence are important first steps to coping with weight stigma and weight bias in your own life.  But they are only first steps.  If you really want to fight these problems, you have to move on to finding these oppressions out in the world and making things better–no matter how uncomfortable or unpalatable these messages might be.

And for those of you who want to feel better about your  body, here are three pieces of advice:

Want to join me in making the world a safer place for bodies of ALL sizes?  Click here and join me!