First do no harm. Diabetes scare tactics just might kill you.

I recently ran across this article on Diabetes Hub which describes two important studies which correlate distress with poorer outcomes for people coping with diabetes.  The first of these studies involved a randomized trial of 150 women with uncontrolled diabetes.  What the study found is that those women in the study who were able to reduce their level of disease-related distress had significantly improved glycemic control.

Typical sources of disease related distress included fear of getting sicker and feelings of isolation or overwhelm in relation to disease management and treatment.  The EMPOWER study tested various forms of treatment interventions and found that regardless of treatment methodology, those people who were able to lower their distress were more compliant with treatment protocols:

The doctors admit that they don’t quite know why lowering distress has such a significant effect on glycemic control among people with diabetes.  However it seems that working to lower distress among people with the disease is an important treatment goal.  According to Dr. Cummings:

We’re surprised at the number of these women caring for children, grandchildren, and other members of their families, often while working, and yet not finding time to care for themselves. It is clearly an important cultural phenomenon that we need to understand better.

The article went on to discuss data gathered from another important study: the national Reasons for Geographic And Racial Differences in Stroke (REGARDS) cohort study.  Dr. Cummings noted that in this study which included 4,000 black and white adults 45 years and older with diabetes and nearly 18,000 adults without diabetes, those subjects with diabetes were more likely to suffer from depression or distress (26.7% vs. 23.2%, P < .001) or both (10.1% vs. 6.2%, P < .001), compared with those without diabetes.  Those people who had diabetes and also symptoms of distress or depression had higher risks for stroke and CV death than people with diabetes without depression or distress.

What all of this seems to make clear to me is the deep need for compassionate, blame-free, stigma-free, evidence-based health care for people coping with diabetes.  The notion of scaring people straight or using dire warnings to fuel completely unrealistic weight loss goals may be more than counterproductive–they might prove especially medically dangerous for this population.  Many forums for people with diabetes are filled with horror stories about how members were stigmatized, told their conditions were their fault and told that if they didn’t get thin, they wouldn’t live to see their children or grandchildren grow up.

But maybe what really needs to grow up is our approach to helping people with diabetes live better, longer and happier lives.  Maybe we need to spend a little less time pointing fingers and a little more time holding hands as we help people make small, incremental, manageable and realistic changes in their lives.  It’s just possible that fear tactics are doing more to harm people with diabetes than to help them.

That’s one of the reasons I’m so excited to be giving a presentation at the upcoming Take Control Of Your Diabetes Conference on September 26 in San Diego, CA  The event focuses on helping people with diabetes take positive, small and sustainable steps to better health. 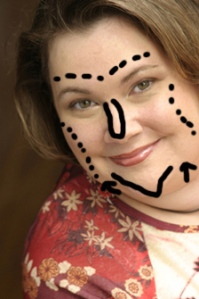 I was somewhat floored this weekend as I listened to a brief radio report on my local public radio station about kids and plastic surgery.  The story (which made reference in the intro to Renee Zellweger’s altered appearance at a recent awards show) talked about the number of kids having plastic surgery and the reasons behind it.  The report opens by talking about the number of teenagers who have had Botox (TM) in 2013.  According to the report, that number is 17,958.  Now the report was careful to state that most of these procedures were for medical reasons.  Botox is used to treat migraines, strabismus (cross eyed) and facial spasms.  Yet when all was said and done, over 1,000 of these Botox procedures were performed on kids in America for “purely cosmetic reasons”.

Now I’m not going to tell any parent or kid what they should do with their own bodies.  It’s their body and their choice.  I don’t think I would let me kid have Botox treatments (if I had one).  But you know what, I think it’s a lot easier to judge if you are not in the situation.  In fact the report went on to state that cosmetic procedures are on the rise among young people, and experts suggest that the reasons for that rise probably include social media culture and the rise of the “selfie” as well as a rise in bullying in our schools.

My knee jerk reaction at the time was, why aren’t they fixing the BULLYING?  Why are kids undergoing the risks and rigors of plastic surgery all because kids can’t stop being mean?  And then I remembered my own school days.  There was a period in my school life, after I had moved to a new school where I was bullied relentlessly.  I was verbally abused and physically abused.  I had my property repeatedly stolen or damaged.  It was so bad, that I often got physically sick from the stress of it all.  My parents were extremely worried, but I felt that their involvement would  only make it much, much worse.  There was no surgery that could have fixed my situation.  And even if there were, I doubt we could have afforded it.  But I wonder, if there were a medical fix, that we could afford if we would have used it.  I was miserable.  My parents were deeply concerned.  Would we have undergone a medical risk if it meant that the problem would go away?  I don’t know.

What I do know is that not all people who are bullied can have that problem fixed by surgery.  The reasons for the bullying are not always physical or may not be easily physically corrected.  And even for surgery that is readily available, a whole lot of people cannot afford it.  And this lack of access to procedures that can make our social media selfie red carpet ready is just another gaping chasm between the haves and the have nots in our world.  So on the one hand I sort of feel like the families that are “opting out” of bullying by changing their physical appearance are making things even harder for the families that do not have that privilege.

But I’d like to suggest that not all cases of kids and families choosing plastic surgery over bullying are quite that simple.  If I could have had a surgery to make the bullying stop, might I have done that?  I honestly don’t know.  And if I had done it, how would my life have turned out differently?  Would I be as strong?  Maybe not?  Would I be less fearful now?  Would I take greater emotional risks at this point because I spent less time as a target–less time being wounded?  And if my parents had chosen that route would they be wrong for perpetuating the need for perfection just because they wanted me to live my best life, be less in pain?

I don’t really know all the answers here, and I think that’s a good thing.  In my mind this is not a simple or black and white thing.  I sincerely believe that we need to change the culture of perfectionism, social media shallowness and cruel bullying among young people.  And I think that erasing differences by changing whatever faults the bullies choose to target in their victims ultimately make things worse for all of us.  But I think it’s important to view this subject through the lens of compassion.  Because if back then, when I was a kid, I would have been able to undergo a brief medical procedure that would make the bullying stop, even for a minute, I don’t know that I wouldn’t have done just that.

P.S. Want me to come to your school and talk about bullying?  BOOK ME!