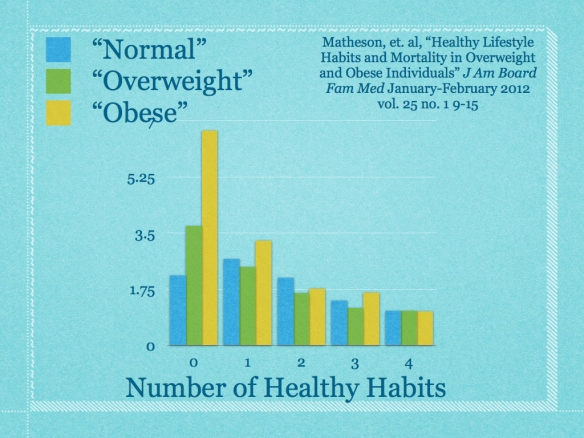 Study showing healthy habits most important for health outcomes in ALL weight categories.

Oh dear.  I think it’s going to be hard to keep up with all of the discriminatory practices being rolled out by insurance companies to punish those who are fat.  But this new announcement from Blue Cross Network is really above and beyond.

Blue Cross recently announced that its program, offering cash discounts to obese members who agreed to add 5,000 steps a day and be measured via a pedometer was a “success”.  Discounts were significant–representing a cost savings of up to $2,000 per year per family.  Apparently these “discounts” were not offered to anybody who was not obese.  But Blue Cross is claiming success, due to the fact that most of those who enrolled in the program were still walking one year later.

I particularly love the fact that despite the fact that Blue Cross of Minnesota cites this press release as its source, the headline for their online blurb reads, “Money Motivates Weight Loss, One Step at a Time”.  I went back to the original press release.  I read it twice. Not one word is said in that press release about weight loss.  NOT ONE SINGLE WORD.  Holy “make it up as you go” reporting, Batman!  It is possible that there is some mention of the press release in the study announcing the findings.  But there is absolutely no mention of weight loss in the abstract.  And in my experience, were weight loss found in the study, it would be in the title of the study and the first sentence of the abstract.  If anybody has access to the full study, I’d love to know if this holds true.  But in any case, the piece on the Blue Cross webpage did not cite the study but rather the press release as its source.

Now, all of this leaves me with a few key questions.  First and foremost, is walking only beneficial to fat people?  Why in the world are they only offering this incentive to people qualified as “obese”?  There are so many studies that show that modest exercise is beneficial to everybody’s health.  And there’s plenty of evidence showing that healthy habits and not weight loss is what is needed to improve health outcomes?  So why are only fat people singled out for this treatment?  And are these actually “discounts” or are we really talking about being rescued from “fat penalties” not being faced by other insurance network members?

It’s also interesting to note that obese members were allowed to choose between this walking program (created by online biometric site, Walking Spree) or Weight Watchers.  Look, I would clearly pick a walking program over Weight Watchers any day of the week, but I wonder if these “obese persons” were interviewed to see if they had been exercising before this incentive was offered.  Were these people actually sedentary?  What about fit fatties like me who already exercise nearly every day?  Were we offered the same price increases/incentives?  Would I be expected to add this onto my already active exercise program?  Do I have to exercise three times as much as a thin person in order for my exercise incentives to “count” and my discounts to kick in?

I also find it extremely instructive that the first line of the press release reads as follows:

It was a controversial move when a health insurer began requiring people who were obese to literally pay the price of not doing anything about their weight – but it worked, a new study finds.

Okay.  First let’s look at the “not doing anything about their weight” line.  How do we know they weren’t doing anything about their weight?  We know that diet and weight loss attempts fail most of the time in the long term.  Some suggest they fail over 90 percent of the time.  So by “not doing anything about their weight” do we mean that people refused to engage in the dangerous practice of weight cycling? Do we know that people weren’t eating well or exercising before and that they are doing those things now?  Do we know that they were sedentary before and are now active?  Or were some of these people active before and have simply shifted to a less rigorous form of exercise (walking) than before in order to receive a discount on their health insurance?

“Comprehensive evaluations are needed to determine whether participation in these programs translates to meaningful changes in health and costs of health care.”

Overall, I have to state that this press release, issued by the University of Michigan Health System is astonishingly devoid of detail, definition or real facts.  While positively gleeful about the fact that most of the people who elected to participate in this program remained participants for over a year, it really leaves us with more questions than answers.  Did people who didn’t like the coercive nature of the program leave the network for a different insurer?  What were the changes in attitude towards exercise among participants?  Did they grow to like exercise more or see it as a punishment?  What are the long term effects on attitudes towards exercise?  And finally, why are we singling out fat people for this program?  Don’t thin people need to exercise too?

I guess I’m pretty worked up here.  Maybe I’d better go for a walk to blow off some steam.  Because some of us fat people go for walks even without “finger-wagging”, “pedometer-wielding”, “biometric-tracking” moralists telling us to do so.

P.S. If you’re looking for a form of exercise that doesn’t come with doom and gloom weight loss messages or any finger wagging whatsoever, you might enjoy buying a copy of my DVD.  And if you are a member of the Fit Fatties Forum, you’ll receive a special discount.  Just click here to order and type FFBL in the discount code box!

4 thoughts on “Only Fat People Need to Walk: As Indicated by Blue Cross Program”