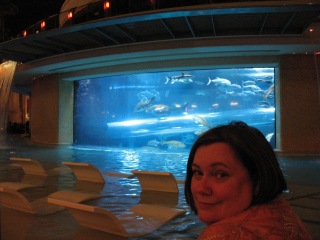 This past year, we spent one night at the Golden Nugget Hotel on Fremont Street in Las Vegas.  The hotel was fairly average for 21st century Las Vegas, except for one thing.  The Shark Tank.  This thing is huge!

Conclusion: The Tank at the Golden Nugget weighs more than me.

Want to learn more about the Shark Tank/Thanksgiving connection?  Check out my series on surviving the holidays at Fat Chick Sings!